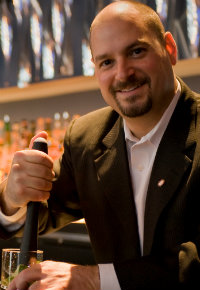 World renown beverage expert Anthony Caporale is the star and producer of the hit off-broadway show “The Imbible… A Spirited History of Drinking”, and is the host of Art of the Drink and Broadway Bartender.  He is also a former brand ambassador, bar and restaurant owner, and currently, he’s director of beverage studies at the prestigious “Institute of Culinary Education” in NYC.
Busy as he is, Anthony loves to speak to sales and marketing groups of all kinds – from restaurants to alcohol brands, to retailers and more – his talk dives into how and why people buy what they do, thus providing a roadmap for increased sales; or he can perform his entertaining “mixology demonstration” while speaking about the history of drinking.

Anthony Caporale is a true pioneer in the beverage world, internationally known for being the first to bring mixology to both YouTube, with his seminal web video series Art of the Drink TV, and then to the New York stage with his groundbreaking Off-Broadway musical comedy series, The Imbible. During the more than two decades of his career, Anthony has served as the Beverage Manager for Bobby Flay’s flagship Mesa Grill restaurant, the Launch General Manager of Forty Eight Lounge in New York City’s Rockefeller Center, and he’s been retained as a Management Consultant for numerous other bars and restaurants. He is a Society of Wine Educators Certified Specialist in Spirits, a New York State Licensed Business School Teacher, and Responsible Alcohol Service Instructor for both TIPS and ServSafe.
Most recently, Anthony has written and produced four hit Off-Broadway musical comedies about the history of cocktails and spirits, and has starred in over 500 performances of the original show, “A Spirited History of Drinking.” The Imbible series is now in its fourth year and has been a smash-hit among both audiences and critics. The second chapter of the series, “Tiki Drinks…And Pirates!” played exclusively on Hornblower’s Alive After Five New York City harbor cruises, and the holiday chapter, “Christmas Carol Cocktails” recently opened for its third season following two sold-out yuletide runs. The latest edition, “Day Drinking,” tells the story of brunch and brunch drinks, and is also in an open run at New World Stages. Anthony is a popular speaker at cocktail shows and industry conventions such as The Manhattan Cocktail Classic and Portland Cocktail Week, and he is a favorite guest on many TV and radio shows including The Dr. Oz Show, The Better Show, and FOX Money.
In addition to producing Off-Broadway shows and video series such as “Broadway Bartender,” Anthony is the Director of Beverage Studies for the Culinary Management Program at New York City’s award-winning Institute of Culinary Education. He has also served as the U.S. Brand Ambassador for Drambuie® Scotch Liqueur, the U.S. Cocktail Ambassador for Truvia® Natural Sweetener, and the Managing Editor of Chilled Magazine, one of the leading trade publications for cocktails and spirits. Additionally, Anthony has given two Talks at Google, and he has appeared in a number of national television commercials including as a judge in The Food Network’s Chopped: Open Basket series and as a Chef Instructor in KitchenAid’s Diamond Blender commercials. Working with IBM’s Watson supercomputer, he created the cocktail recipes for the groundbreaking cookbook, Cognitive Cooking with Chef Watson: Recipes for Innovation from IBM & the Institute of Culinary Education. In 2008, Anthony was commissioned a Kentucky Colonel by Governor Steven L. Beshear for his work promoting and educating consumers about Bourbon.

Anthony Caporale is a hand on sales guy, marketer, and bartender extraordinaire. His keynote presentation focuses on how and why people buy, whether it be strategies for your frontline staff putting forth cocktail suggestions right in front of a customer; or for big brands looking for ways to increase bottle sales at the retail level, this is a talk you don’t want to miss – because Anthony understands brands and front-line sales – he says: You must offer what your customer wants to buy, not what you want to sell.  And he’ll show you how to discover exactly what that is.

Whether that be a drink, a brand or a bottle, Anthony’s talk will leave you with actionable insights and strategies you can use in your business.  He will not leave your group with a hangover of any kind. ( Although he can – see the next topic below!).

The Art of The Drink

This talk is for groups looking for something really entertaining, and… a little different. Anthony can customize this presentation for your group – If you are looking for a talk about the history of Scotch, or alcohol in general, there is always at least one amazing takeaway from this presentation: A well-mixed cocktail!

Actually, you will leave this presentation more educated about the history of the drink, and you just might pick up some nifty bartending skills along the way.  This session can be billed to your attendees as a keynote presentation/bartending demo/fun!