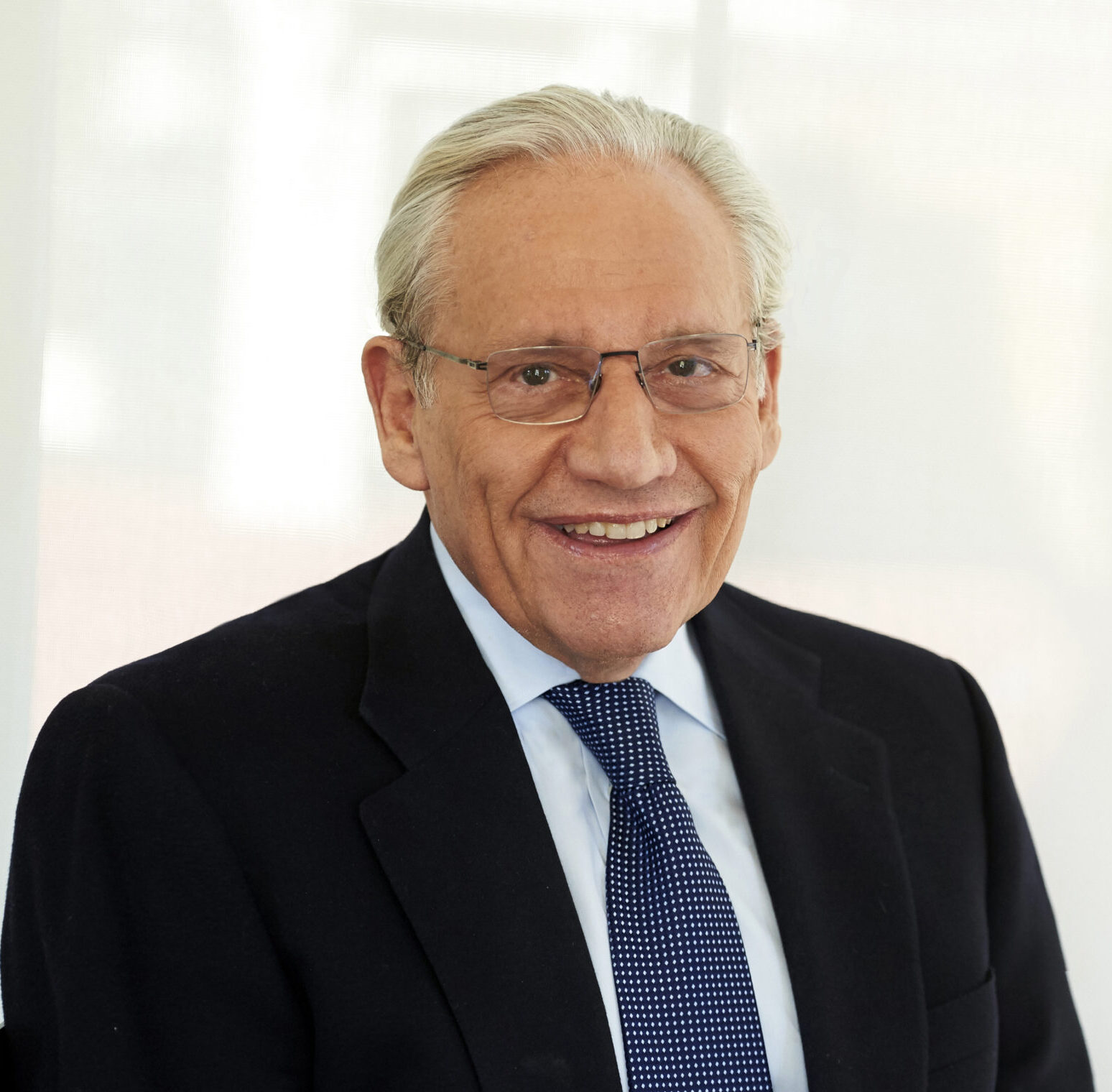 Bob Woodward gained international attention when he and Carl Bernstein uncovered the Watergate scandal in 1973. Since then, he’s worked to shine a light on the inner-workings of secret government. Woodward’s non-partisan revelations to readers and speech audiences provide a view of Washington they’ll never get elsewhere. Woodward has written about the last nine U.S. presidents and chronicled how the power of the presidency has evolved. He is author of 19 bestselling books – 13 were #1 – more than any contemporary nonfiction writer. His latest bestseller, Fear: Trump in the White House, is the deepest dive ever made into the first months of any American president. In his speeches, Woodward looks at the expanding powers of the presidency and how this president and administration are governing. He can also compare and contrast the nine presidents he’s covered and their impact on history. And finally, he can assess the role of the media and how well it is (or isn’t) doing its job. Audiences will be awe-struck by insights from this living journalistic legend. Currently associate editor for The Washington Post where he’s worked since 1971, Bob Woodward has won nearly every American journalism award including two Pulitzers.

Former CIA director and Secretary of Defense Robert Gates wished he’d recruited Woodward into the CIA, “His ability to get people to talk about stuff they shouldn’t be talking about is just extraordinary and may be unique.”

Therein lays the genius of Bob Woodward – a journalistic icon who gained international attention when he and Carl Bernstein broke the deeply disturbing news of the Watergate scandal.  The book they wrote – All the President’s Men – won a Pulitzer Prize.

Watergate’s theme of secret government is a common thread throughout Woodward’s career that has spawned 19 books – all national bestsellers – 13 of them #1 – more than any other contemporary nonfiction author.  His 19th book, FEAR: Trump in the White House, was published on September 11, 2018.  In the process Woodward became the ultimate inside man.  No one else in political investigative journalism has the clout, respect, and reputation of Woodward.  He has a way of getting insiders to open up – both on the record and off the record – in ways that reveal an intimate yet sweeping portrayal of Washington and the budget wrangling, political infighting, how we fight wars, the price of politics, how presidents lead, the homeland security efforts, and so much more.  His work is meticulous and draws on internal memos, classified documents, meeting notes and hundreds of hours of interviews with most of the key players, including the president.

As a speaker, Woodward pulls the curtain back on Washington and its leaders to captivate audiences with stories that are sometimes surprising, at times shocking, and always fascinating.  He blends stories that are both up to the minute and from the past (to provide historical context). Woodward speaks as he writes – crisp and concise – and helps people get behind the spin to understand what’s really going on in the halls of power in an age of 24-hour news, social media, and snarky politics.

Professionally, Bob Woodward is currently associate editor for The Washington Post where he’s worked since 1971. He has won nearly every American journalism award, and the Post won the 1973 Pulitzer Prize for his work with Carl Bernstein on the Watergate scandal. In addition, Woodward was the main reporter for the Post’s articles on the aftermath of the September 11 terrorist attacks that won the National Affairs Pulitzer Prize in 2002. Woodward won the Gerald R. Ford Prize for Distinguished Reporting on the Presidency in 2003.

The Weekly Standard called Woodward “the best pure reporter of his generation, perhaps ever.” In 2003, Al Hunt of The Wall Street Journal called Woodward “the most celebrated journalist of our age.”  In listing the all-time 100 best non-fiction books, Time magazine has called All the President’s Men, by Bernstein and Woodward, “Perhaps the most influential piece of journalism in history.”

THE STATE OF THE AMERICAN PRESIDENCY

Everywhere legendary journalist Bob Woodward goes, he says people ask to know what’s really going on in Washington. Their questions fall into four categories: 1) The presidency: How is President Trump doing and surviving? How does Trump compare with the eight presidents – Nixon to Obama – that Woodward has reported on for The Washington Post and in his bestselling books? 2) The investigation of special counsel Robert Mueller: is it like Watergate or will it fade away like Reagan’s Iran-Contra scandal? 3) Conflict: What is the likelihood of a new war? What are the goals with North Korea, in the Middle East, with the Islamic state, and on terrorism? Will there likely be a major escalation in one of the current conflicts? And 4) The economy: Is the American/global economy sound or are we headed for trouble? How is Trump’s America First agenda playing out with our allies and enemies around the globe?

In Woodward’s speeches, the two-time Pulitzer Prize-winning associate editor of the Post offers some well-reported answers to these questions that audiences won’t learn from any other source. As he reported on previous presidents, for 46 years Woodward has immersed himself in their decision-making, scandals, wars, and economic policy like no other reporter. He leveraged a rich network of sources – applying his signature aggressive but fair and non-partisan reporting method for his book on President Trump, his administration, and its many controversies. As with his 19 bestselling books – 13 of which have been #1 (including his most recent book, FEAR: Trump in the White House) – Woodward provides a behind-the-scenes examination of what’s really going on and what it means.

In 2014, Robert Gates, former director of the CIA and secretary of defense, said of Woodward, “He has an extraordinary ability to get otherwise responsible adults to spill [their] guts to him . . . his ability to get people to talk about stuff they shouldn’t be talking about is just extraordinary and may be unique.”  That is Woodward’s true gift and audiences at his speeches leave transfixed by what they’ve learned.

“What (Theodore) White did for presidential campaigns, Post Associate Editor Bob Woodward has done for multiple West Wing administrations—in addition to the Supreme Court, the Pentagon, the CIA and the Federal Reserve.”

“Your presentation was outstanding.  Your content was thoughtful, riveting and provocative. You deftly touched on the critical topics most on our investor’s minds.”

“Bob Woodward was terrific.  He was extremely well received and had the audience hanging on his every word.  We really appreciated his insights.”

“As for Mr. Woodward’s performance, it was simply stellar. He held the sold-out crowd of 1,200 in his hand, hit all his press marks with grace, and handled the post-show meet and greet like a master.”

“Bob did an excellent job, he was absolutely outstanding! Many have commented that his keynote was the best they have experienced.”

“Thank you for joining us at the CoBank Board Dinner. Your perspective on the changing nature of the Presidency was very well received. To a person, every comment about the dinner, and your remarks in particular, was glowing. I am grateful for your contribution making it a wonderful evening. Your remarks were educational, timely and entertaining. In short, it was a perfect message for our dinner.”

“Bob Woodward was awwwwwsome. He spoke for 30 minutes and then sat down and we did a Q&A with our VP of Federal Affairs. He signed about 30 books for us and we had purchased some to sell as well. After his speech people lined up to say hello, get their photo taken and have books signed. I bet he was there for another 30 minutes. I really enjoyed him as I know others did, too.”

“The evening was a resounding success, and Bob was just outstanding. What a nice and humble guy, too!”

“Yesterday was great! I think most people here appreciated the opportunity to spend a day with arguably the greatest investigative journalist of all time. Bob Woodward was very good with the kids, and his sense of humor kept the adults relaxed as well. We were all amazed at just how much Bob knows about the last few Presidents. My students had seen All the President’s Men the night before so they had fun comparing Bob with a young Robert Redford.”

“Bob Woodward’s format was perfect for engaging the audience. We filled the venue to its capacity!”

“Bob Woodward was so gracious with his time with our donors and guests and was a delight to be around. His remarks were smart, insightful, thought-provoking, witty, hilarious and portrayed the essences of our past presidents in his unique way. We’ve been fortunate to bring some influential, bright minds to Santa Barbara and Mr. Woodward definitely put us on the map for hosting quality conversations about things that matter.”

“Bob Woodward was great! He was fascinating and he provided an interactive discussion. We were all thrilled!”

“Bob Woodward’s presentation made the evening a success!”

“Bob Woodward and Carl Bernstein were marvelous, individually and as a team. Their joint presentation was smooth, well-prepared, and not only riveted our audience, but also demonstrated the complementary differences between them that made them a successful working duo.”

– Society of the Four Arts

“Bob Woodward was a big hit both on the stage and at dinner. He is a warm and engaging guy and and a perfect fit for our audience.”

“The best pure reporter of his generation, perhaps ever.”

“The most celebrated journalist of our age.”

– Robert Gates, former director of the CIA and Secretary of Defense

“Maybe the single greatest reporting effort of all time.”