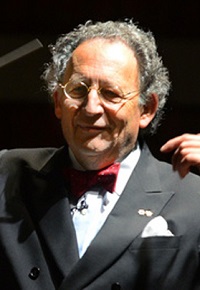 Symphony Conductor and Motivational Speaker Boris Brott’s interactive presentation has entertained and informed thousands of people in Fortune 500 companies throughout the world. He draws clearly accurate comparisons of Leadership, Teamwork, Innovation, and Creativity between business organizations and symphony orchestras. Boris draws out the juxtaposition of teamwork and leadership the need for creativity within an organization; the joy of communication and the achievement of success. All are explored through the medium of music.

Boris Brott is one of the most internationally recognized Canadian conductors, holding major posts as music director in Canada and the United States. He enjoys an international career as guest conductor, educator, motivational speaker and cultural ambassador.

Internationally, Boris has served as Assistant Conductor to the New York Philharmonic under the late Leonard Bernstein, Music Director and Conductor for the Royal Ballet, Covent Garden, Chief Conductor of the BBC National Symphony of Wales and Music Director of the Northern Sinfonia of England. His extensive guest-conducting appearances have been around the world. In 2000, he conducted Leonard Bernstein’s The Mass for Pope John Paul II at the Vatican.

In 1988, Boris was awarded the Officer of the Order of Canada, Canada’s highest civic honor. That same year, he was awarded an Honorary Doctorate of Law at McMaster University. Two years later, he was made a Knight of Malta. In 1992, he was selected International Man of the Year by the International Biographical Center in Cambridge, England. In 1996, he was elected a Fellow of the Royal Society of Arts of Great Britain. In 2006, he was appointed to the Order of Ontario.

In addition to his conducting career, Boris is a motivational speaker, presenting more than 35 talks annually around the world for Fortune 500 companies.

Besides numerous film and radio commitments, Mr. Brott has conducted, produced, and and hosted over 100 television programs on both sides of the Atlantic. He has recorded for CBC, Septre-Mace, Mercury, Pro-Arte Records and Sony Classical where CDs with the late Glenn Gould have been released.

He lives in Hamilton, Ontario, with his wife, Ardyth, who is an author and lawyer. The Brotts have three children and two dogs.

Thousands of people across corporate America have heard Boris Brott’s interactive presentation — he draws comparisons between business organizations and symphony orchestras. Both have common goals, each must perform in harmony to achieve those goals, and each continually strives for perfection. Often, both attempt to be innovative and creative.

Boris draws out the juxtaposition of teamwork and leadership the need for creativity within an organization; the joy of communication and the achievement of success. All are explored through the medium of music.

During his 25-minute presentation, these analogies are enhanced with slides and video. The audience hears of Beethoven’s struggle, his quest for perfection…brief passages from some of Beethoven’s best known works. Then, it’s time to play together…

Boris instructs the audience to reach under their chairs where they will find a tonebar — a musical instrument with a mallet. The audience has been divided into five specific notes. After “rehearsing” and enjoying the levity and excitement, the audience is prepared to play Beethoven’s Ode to Joy. Boris turns to the video screen, gives a signal, and a full symphony orchestra begins to play. At the appropriate point, he turns to the audience and “conducts” them in this informative, educational, and fun-filled presentation. The audience is thrilled to be playing a significant part and to make music under the direction of a symphony conductor. Audiences and corporate executives find it a memorable and unique presentation.

Variations on “Playing Together”

• A live orchestra joins Boris on stage. Musicians and their instruments are introduced. A short musical example is played. The is repeated until an 11-piece orchestra is formed on stage.

• The meeting’s host joins Boris in conducting the audience and/or explaining the similarities between their organization and a symphony orchestra.

• Each script is tailored to suit the meeting’s theme or message.

• Specific concepts germane to the organization are brought out in the script.

• The presentation’s length is suited to the requirements of program.

• Mr. Brott can act as host through the duration of the meeting.

In addition to the “Playing Together” presentation, the following other concept can be presented to your audiences:

Creativity rests in all our souls. This presentation demonstrates five steps that are at the heart of every creative process. Boris interacts with “Professor Siegfried” on screen, and together they take the audience through the steps necessary to concoct anything from E=MC2 to an enlightened business plan to the perfect Christmas party.

This is an interactive presentation involving the meeting’s host as well as the audience. But the heart of the piece rests with Boris and Professor Siegfried taking the steps necessary to “light the creative flame.” After each step, Boris “conducts” the audience playing their tone bars, and concludes his presentation with a roaring rendition of the music from Star Wars.

“Your combination of intellect, energy, and musical expertise yielded a powerful example of teamwok in action for our leaders” Senior Vice President Human Resources, HUMANA

“No one has ever captured our sales and marketing team as you did. In watching the audience during your performance, I knew they were totally immersed” Tradeshow and Special Events Manager, Amadeus Global Travel Distribution LLC

“We were so amazed how six hundred of us could so quickly work as a team and release our potential on the musical front!” Assitant Managing Director, GUINESSUVD