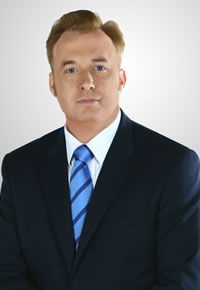 Brian Lilley, former host of “Beyond the News”, examines and analyzes all the relevant news and issues of the day. Brian is currently hosting his own talk radio show on CFRA in Ottawa, ON in the evenings.

From his talks on national and global politics, to how we are losing our freedoms bit by bit, Brian’s keynote brings wit and insight to your audience, all the while including inside scoops you just won’t hear anywhere else.

His keynote presentation is some of the best news commentary you’ll get anywhere – on all of today’s hot topics – politics, climate change, doctor assisted suicide, the nanny state, vaccinations, wasteful government spending, you name it – Brian is sure enlighten your audience with his nuanced perspective. Brian can fully customize his talk to suit your industry. And make sure your audience has time after for the liveliest Q & A you’ve had in a while!

Brian Lilley is the former host of the primetime program Byline with Brian Lilley on the old Sun News Network, and is the co founder of TheRebel.Media. He is a columnist whose work  has appeared in over 30 daily newspapers across Canada. Currently Brian hosts a daily talk radio show on CFRA in Ottawa, ON.  Brian has been working in major Canadian markets for the last 15 years. In that time he’s covered prime ministers, presidents, royal visits and several demonstrations, including the Quebec City riots for CNN. A veteran of political coverage on Parliament Hill, Brian has covered the last five federal elections as well as several provincial and major municipal campaigns. A watcher of societal trends, Brian’s work often focuses on the intersection of culture and politics.

In the USA, Brian has been featured on CNN radio and TV, CBS radio, Fox Business, The Glenn Beck Radio Program, The Blaze, Breitbart, and more.

Where do we go from here? Canada’s political landscape could see major shifts in the next couple of years. Add to that the global turmoil and political realignments and the world is a much different place than it was a few years ago. What does that mean for Canada’s political, cultural and economic future? Brian Lilley, host of Byline on Sun News Network examines these issues on television each night and can bring his wit and insight to you and your guests.

THE STATE BROADCASTER JUMPS THE SHARK

Is it the end for the CBC, for the mother corp? Does Canada even need a government-owned and run broadcaster in the post 500 channel, cable cutting, digital streaming universe? Veteran journalist Brian Lilley gives his take on how Canada can make sure it’s voice is heard in the new globalized broadcast world – without the government funding their own broadcaster.

By the time he leaves, President Obama will have been in the White House for 8 years, and Hillary Clinton looks poised to take the election in 2016. Where is the conservative voice in the equation? Using public opinion research, recent cultural and electoral trends, Brian examines how conservatives can harness what is happening now – to win in the future.

Canada’s labour laws should seek to strike a balance between the rights of employers and the rights of workers but they don’t. In jurisdiction after jurisdiction, labour laws favour one group over all others – union leaders. Brian’s extensive reporting and personal experience with the union movement illuminate his discussion on the need for real labour law reform in Canada that benefits everyone.

THE TRUE NORTH STRONG AND NOT FREE

Are we owners or serfs? Most Canadians think they live in a free society where a man’s home is his castle. But it’s not, not anymore. Why? All too frequently our elected officials (and the bureaucrats that toil under them), bring in laws, bylaws and regulations that reduce us to mere serfs.

From laws telling land owners they need permission to cut down a tree on their own property, to regulations on which light bulbs, door handles and toilets they must use in their home, the march of the bureaucrats is crushing freedom in this country. And that’s not even the end of it; in Canada we think we have freedom of expression. But we don’t, because, as Brian will explain, we still have “human rights” commissions.  This talk is a must hear if you are even a bit concerned about our most basic rights – and why our tax dollars are funding all of this.