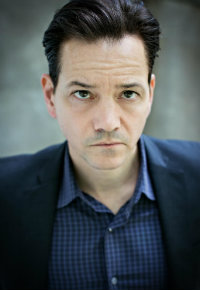 Frank Whaley has worked with some of the biggest names in film over the past 30 years and has appeared in some of the most iconic film scenes in Hollywood history – from Pulp Fiction to Swimming With Sharks and Field of Dreams. So now, he’s sharing his personal journey and what he’s learned along the way. It’s a talk about perseverance and overcoming daunting obstacles!  In this inspiring keynote, Frank tells how he survived an impoverished and chaotic childhood to achieve success in arguably, the most difficult business of all: Show Business.

On the lighter side of things, Frank can also offer a Q&A with your group, where he’ll share incredible stories from his career working alongside many A-listers, that will amaze and delight audiences. This will be an evening your guests won’t soon forget…!

Biography Renowned character actor, writer, and filmmaker Frank Whaley have appeared in over one hundred film and television productions. In his illustrious and eclectic career spanning thirty plus years, Frank has worked with everyone from Meryl Streep to Traci Lords (not like that) from Jack Nicholson (twice) to Jessica Tandy (not like that). During this three-decade-long and wild journey, Frank has had the privilege of working alongside such iconic film stars as Marlon Brando, Burt Lancaster, Rita Moreno, Tom Cruise, Samuel L Jackson, Kevin Costner, James Earl Jones, John Travolta, Annette Benning, Bruce Willis, Danny DeVito, and Sir Ben Kingsley to name but a few. Not to mention Oliver Stone (four times), Quentin Tarantino, Gary Busey, Val Kilmer. Mega-stars and a whole lot of crazy people too. How Frank has managed to maintain a shred of his own sanity is an enlightening and fascinating tale. Frank will share stories and highlights from his vast and often surreal career, one that has seen its share of ups, (Field Of Dreams, Pulp Fiction, Born On The Fourth Of July) and downs (Cold Dog Soup, Bombshell, The Cell 2!).

In addition, Frank Whaley is also an accomplished filmmaker. His debut as writer/director in 1999, Joe The King, with Val Kilmer and John Leguiziamo earned him the Sundance Film Festival award for best screenplay, and a Grand Jury Prize nomination, and went on to become one of the top independent films of that year. Upon release of his second film, The Jimmy Show in 2001, which he also starred in opposite Ethan Hawke, Roger Ebert called Frank “one of the strongest and most unique voices in indie films.” Frank went on to write and direct two subsequent films, New York City Serenade in 2007 with Wallace Shawn and Chris Klein, and in 2015, Like Sunday, Like Rain with Leighton Meester, Debra Messing and Billie Joe Armstrong. His next feature, Winning The City, which he adapted from the novel by Theodore Weesner, will go into production early next year. Frank has also found success as a writer in television and has two pilots currently in development.

Frank has truly seen and heard it all and offers a unique viewpoint and perspective that only an actor of his ingenuity, self-reliance, and perseverance can express. Frank Whaley has had an outrageous and wildly peculiar journey. For instance, Frank has worked with two out of four Beatles. Where, when, and how this occurred will blow your mind. Here’s a hint: the cast of the two projects combined include Randy Quaid, a deceased dog, and Don Johnson-not necessarily in that order. Did you know that Frank starred in the first co-production between an American film studio, 20th Century Fox, and the Russian state film company Mos Film? That he had unprecedented access inside Red Square and the Kremlin? Well, he sure did, and opposite Roman Polanski to boot! Hear stories from his three months behind the iron curtain, where he was hounded by the KGB, had his door broken down by the husband (and KGB officer) of his co-star Natalya Negoda, and spent ten days in a Russian hospital where he nearly died. Most importantly your audience will gain some valuable and special insight from a man who overcame an impoverished, chaotic, and often violent childhood to achieve success and regard in arguably the most difficult business. The unlikely story of how Frank Whaley managed to carve out his own unique place, earn a consistent living, and build a lasting and solid career while maintaining a sixteen-year marriage and raising two teenage kids is an amazing, hysterical, moving, and inspiring story.

RULES TO LIVE BY (TO GET BY)

In this talk, which is especially helpful for college students and graduates of acting and film schools, Frank will share his rules for living a good life and staying sane while pursuing a career in show business, but the message resounds for groups of all kinds, as these rules are applicable for everyone.

Travel light – in all aspects of life.
Get off the couch and do something – like exercise
Be quieter and listen
Out with the self-doubt
Put the smart phone away

An Evening With Frank Whaley

This is a moderated q&a, where Frank will regale your audience with stories from 30 years in the Film and TV business.