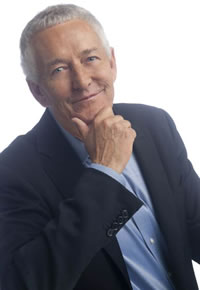 Jason Jennings is a thought provoking, highly skilled communicator who delivers the goods when it comes to leading people and companies to their full potential in the areas of revenue growth, reinvention, speed, productivity, leadership and employee engagement.

During the past decade Jason Jennings and his researchers have screened and analyzed the performance of more than 200,000 companies and studied more than 25,000 in-depth for his bestselling books on: speed, productivity, growth, leadership and reinvention.

His speeches and presentation are based on the results of his research and the contents of his books. Speaking of his books, Jason Jennings is one of the most successful and prolific business and leadership authors in the world, and his greatest thrill is helping lead individuals and companies to their full economic potential.

Authority on Leadership, Growth and Innovation

Jason Jennings is a researcher and one of the most successful and prolific business and leadership authors in the world and his greatest thrill is helping lead individuals and companies to their full economic potential.

He began his career as a radio and television reporter and was the youngest radio station group owner in the nation. Later, he founded Jennings-McGlothlin & Company, a consulting firm that became the world’s largest media consultancy and his legendary programming and sales strategies are credited with revolutionizing many parts of the broadcasting industry.

He traveled the globe in search of the world’s fastest companies for his landmark book,It’s Not the Big That Eat the Small – It’s the Fast That Eat the Slow. Within weeks of its release it hit the Wall Street Journal, USA Today and New York Times Bestsellers Lists. Now published in 32 languages, USA TODAY named it one of the top 25 books of the year!

Next, he and his research teams identified the world’s ten most productive companies for his bestsellerLess Is More. That was followed by his book,Think BIG – Act Small, which profiled the only ten companies in the world to have organically grown both revenues and profits by double digits every year for ten consecutive years. Like all his previous books it debuted on all the bestseller charts. His next book,Hit the Ground Running – A Manual for Leadersrevealed the tactics and strategies of the ten CEO’s who created the greatest amount of economic value between 2000 and 2009.

His latest book for his publisher Penguin Putnam,The Reinventors – How Extraordinary Companies Pursue Radical Continuous Change was released on May 10, 2012and reveals the secrets of those leaders and organizations that have successfully reinvented and transformed themselves. In total, Jennings and his researchers have screened and studied more than 200,000 companies.

Along the way he found time to join forces with well known cardiologist Dr. John Kennedy and coauthor the 2010 Health, Mind and Body bestseller,The 15 Minute Heart Cure –The Natural Way to Release Stress and Heal Your Heart in Fifteen minutes a Day.

Critics call his books, “extraordinarily well researched, insightful, crisply written, accessible, intriguing and a vital resource for everyone in business,” and USA TODAY calls Jennings one of the three most in-demand business speakers on the planet along with the authors ofGood to Great and In Search of Excellence.

When not traveling the world on research, in search of adventure, and doing eighty keynote speeches each year, Jennings and his family split their time between the San Francisco bayside community of Tiburon, California and their lodge, Timber Rock Shore on a small lake in Michigan’s northern peninsula where they share the environment with native moose, bear, deer, wolves and soaring eagles.

Reinvention – The Six Secrets of Change
This keynote is based on Jennings’ latest book released on May 10, 2012, The Reinventors –How Extraordinary Companies Pursue Radical Continual Change, which identifies more than 100 companies that have made constant change an integral part of their DNA. By examining innovative businesses such as Apple, Capital One, Starbucks, Arrow Electronics, Nucor Steel, Smithfield Foods and many more, Jennings identifies six points, tailored to your organization’s needs that will help you crack the code on change. Key findings include the fact that successful reinventors are committed to double digit annual growth, letting go of yesterday’s breadwinners, conventional wisdom and ego, making lots of small bets and getting and keeping everyone on the same page.
(This speech can be presented as a 60 or 90 minute keynote (with or without Q&A) and can also be delivered as a half-day or full day program).

The Five Secrets of the World’s Best Performing Companies and Leaders
This is the crowd pleaser that’s received standing ovations from hundreds of thousands of people in scores of countries around the world. Jennings’ research has revealed five vital leadership traits that are shared by the most enduring and best performing businesses and organizations in the world. This information packed and dynamic speech not only provides the roadmap for achieving long lasting business success but leaves people believing they’re all on the same team and capable of carrying out the mission ahead of them.
(This speech can be presented as a 60 or 90 minute keynote (with or without Q&A) and can also be delivered as a highly interactive half-day or full day program).

The Need for Speed – How to Get Everything Done Faster
If your audience is being asked to move faster and get more done with less, this keynote speech will deliver results! It’s based on content from the NY Times bestseller, It’s Not The Big That Eat The Small –It’s The Fast That Eat The Slow, and USA TODAY named it one of the 25 most important books of the year. It’s brutally honest; fast paced and provides a roadmap for getting things done.
(This speech can be presented as a 60 or 90 minute keynote (with or without Q&A) and can also be delivered as a highly interactive half-day or full day program).

One of Jason’s guiding principles is that every audience deserves a presentation that’s been custom tailored to fit their needs and exceed their expectations. In order to make that happen he undertakes the following preparation for each speech:

When this work has been completed you’re insured of receiving a highly targeted and personalized speech.

When his travel schedule permits Jason is pleased to attend a reception the evening before the speech, autograph books, shake hands during a breakfast or lunch or attend a VIP Photo Shoot and Meet & Greet.

Jason’s speeches consistently receive the highest evaluations ever received by companies and organizations that hire him.