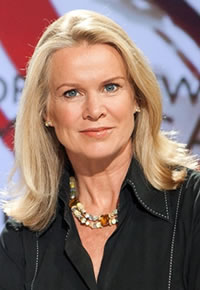 Daughter of a British diplomat, Kay has worked and lived all over the world. Kay’s fresh perspective on American politics and international affairs is rooted in her global background. Interviews top U.S. and international newsmakers daily. Kay’s broadcast from Washington is seen globally on BBC News network. Co-author — The Confidence Code, The Confidence Code for Girls, and Womenomics.

Katty (pronounced CAT-TEE) Kay is the lead anchor for BBC World News America. She is seen in America on nearly 300 Public Broadcasting Stations which carry BBC World News America broadcasts. Katty’s reports on the latest U.S. economic and political news are also carried by BBC News channels globally, giving her a vast international audience. In addition, Katty is also a frequent guest commentator on NBC’s Meet the Press as well as a regular guest and substitute co-host on MSNBC’s Morning Joe. She also hosted 100 Days on the BBC, covering the first 100 days of the Trump administration.

Katty (pronounced CAT-TEE) Kay is the lead anchor for BBC World News America. She is seen in America on nearly 300 Public Broadcasting Stations which carry BBC World News America broadcasts. Katty’s reports on the latest U.S. economic and political news are also carried by BBC News channels globally, giving her a vast international audience. In addition, Katty is also a frequent guest commentator on NBC’s Meet the Press as well as a regular guest and substitute co-host on MSNBC’s Morning Joe. She also hosted 100 Days on the BBC, covering the first 100 days of the Trump administration.

The daughter of a British diplomat, Katty grew up all over the Middle East. Her career with the BBC began in Zimbabwe in 1990 where she started filing radio reports for BBC World Service radio. From there she also covered the end of apartheid in South Africa. Katty then went on to work as a BBC correspondent in London, and later Tokyo, reporting on stories including the Kobe earthquake and the Japanese economic recession. She settled in Washington in 1996 where she took some time out from broadcast journalism to join The Times’ (the British newspaper) Washington bureau before returning to the BBC in 2002.

Katty is a popular speaker who addresses both current political events and also issues impacting women. Katty’s talks on American politics and global affairs offer the fresh perspective of someone who has lived in and reported from the Middle East, Africa, Asia, Europe, and now Washington, D.C. She looks beyond the headlines and provides valuable insights on the top stories making news right now — the challenges facing the President and Congress, the outlook for the next major U.S. election, global economic news, world trouble spots, diplomatic dustups, terrorism, and more. Additionally, the challenges of juggling a demanding career and a family with four children led her to speak and write on two topics that strongly resonate with women: confidence and something she calls “Womenonics.”

Katty Kay is co-author (with Claire Shipman) of two New York Times bestsellers. Her latest, The Confidence Code: The Science and Art of Self-Assurance—What Women Should Know, inspires women to understand that confidence – the lynchpin of success – is a choice. She shows ways to break out of comfort zones and take risks that pay off. In her first book, Womenomics: Write Your Own Rules for Success, she examined the workplace revolution and inspired women to take control, dream big and discover a different way of weaving work into their lives – and in the process create more profitable companies with happier and more productive employees.

Katty studied modern languages at Oxford from where she went on to work for a brief period with the Bank of England. She speaks fluent French and Italian and also what she describes as ‘rusty Japanese’. Katty is married to Tom Carver, a strategic risk consultant. They live in Washington, D.C. with their four children. 2/17

Washington from a Different Angle

The election of Donald Trump has turned the American political world upside-down. His presidency continues to be just as unpredictable. President Trump’s way of doing things is unconventional – and that’s going down well in some quarters; not so well in others. And it doesn’t fall just along party lines. How is it playing out? What’s next? What do administration insiders say in private moments? How does the rest of the world view it? Can Congress – and members of the president’s own party – find common ground to make progress? Will the White House be able to overcome the increased levels of polarization? As a British journalist in Washington, DC, Katty Kay looks at Washington from a different angle. She offers a perspective on the latest drama of American politics that only an outsider can provide. The veteran BBC anchor has the experience and sources to reveal the story behind the headlines and provide valuable context for her audience. Katty tailors this speech to suit the interests of each audience – delivering solid insights with charm and understated humor.

Global times call for global perspective. As someone who has lived in and reported from North America, the Middle East, Africa, Asia and Europe, Katty Kay’s speech offers rich observations on the global news making headlines right now and what world leaders are doing. The world is changing at lightning speed. Understanding the complex issues requires a constant refresh of perspective. It’s a world where many of the fastest growing economies are in Africa; where 300 million micro-bloggers challenge the supremacy of the Chinese state; and where one-third of the population of the Middle East is under thirty. It’s a world where big challenges abound – economically, politically and in terms of security and safety. And the landscape changes on a daily basis. Where is it headed? Katty Kay offers insights on what the future holds globally and how it will impact her audience.

Confidence! With it, we can take on the world; without it, we don’t ask for raises, request that important meeting or take risks. In the success equation, research shows that confidence is even more critical than competence. But what is confidence? Where does it come from? Are we born with it or do we acquire it? And why do women have less of it than their talents deserve? In this speech Katty Kay inspires audiences with the latest scientific research and anecdotes from her own career and the many women she interviewed for the book. “Neurologists have isolated a ‘confidence gene,’” says Katty “and when I was tested, I learned I am not genetically predisposed to being confident.” Her experience is like that of so many women, even senior women, whose lack of confidence is what really holds them back. But confidence is also art – impacted by how we choose to live with our genes. The good news then is that being confident is a choice. Katty’s talk inspires audiences to take action — to go outside their comfort zones, to try new hard things, to take risks, to be prepared to fail and to discover the secret to success.

At the World Economic Forum in Davos, IMF Chief Christine Lagarde called the advancement of women the greatest economic opportunity of our time. She was recognizing what Katty Kay calls Womenomics, the extraordinary value of women in the workforce. Global studies show that companies who employ more senior women make more money. But too many women in their mid-thirties hit the brick wall of kids vs. career and decide to leave the workforce. We can’t afford to keep losing them. Katty marshals evidence from employers large and small to show how it’s possible to help women meet the demands of family and career and keep these valuable contributors in the workforce. What starts as talent retention initiative becomes a profit bonus any company would be happy to have. Katty’s talk inspires women and provides a practical guide to employers.

A seasoned moderator and interviewer, Katty Kay brings experience and poise to the stage – deftly guiding the conversation in ways that unearth valuable insights with great, and sometimes surprising, results.   Katty Kay will make the most of the important panel gatherings and notable guests on the program.

“Fantastic!!!! Katty was simply fabulous. The audience loved her.”

“Katty Kay was a huge hit with the attendees at NY Cash Exchange! She did a great job of creating a current events message geared to our group’s primary areas of interest and her presentation style was very polished and professional. Her humor provided a welcome balance.  Perhaps the highest point was the Q&A session. She is obviously very well informed and quick minded. We would certainly book her again.”

“I can’t begin to describe how well Katty connected with our audience. She really resonated with the group as a single presenter discussing politics in DC and the obvious partisanship and discord that threaten our political representatives to govern. Interestingly, she does not give the press a free ride either, as too often, be it television or radio, the media has turned nearly as partisan as our politics.  She was engaging, confident and yet self-deprecating at the same time.  Doing double duty, she then moderated a business session discussing gender issues in the industry where she performed magnificently. With her recent book, “Womenomics”, it was obvious she knows the concerns and problems of women in the corporate world and their impact in the marketplace.  We had several compliments about this session, especially from men. Having said all that, perhaps her most important attribute is her genuineness. She was perfect for our program and our audience.  I would not be hesitant to recommend her to any organization.”

“Thank you for being such a great keynote speaker. Your presentation touched our entire membership. The way you set the table with your message of where America fits in today’s Global Economy, was quite skillful and eye opening for those attending. They felt reassured that the USA was still the world leader that they all grew up believing and yes … better days are on their way!”

“You were absolutely fantastic – and got rave reviews.”