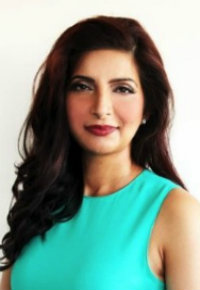 Maninder Dhaliwal is many things; an electrical engineer, a cyber security adviser, consultant, mentor, investor, deal maker, and she serves as a director on many boards. But she is also a fearless advocate for the economic empowerment of women both here, and around the world.

She passionately believes in leadership, diversity, and helping the marginalized who cannot help themselves. So – If you are looking for a speaker who is a relentless champion for all that is right and just in the world, one who came to Canada with nothing and became an incredible success story, then Maninder is a speaker you don’t want to miss.  One of her messages we like: “Progress sometimes requires knocking down walls, other times, all you need to do is widen the doorway.”

Maninder Dhaliwal is the President and CEO of Lions Gate International. She is an award winning entrepreneur, successful investor, and an experienced Corporate Director. Maninder specializes in India focused international venture projects in technology, manufacturing and innovation applications in healthcare.

A Business in Vancouver’s Top 40 under 40 winner, she received her Masters in Electrical Engineering from University of British Columbia, and Executive Education from Harvard Business School. She holds the Professional Engineer (P.Eng.) designation from the Association of Professional Engineers and Geoscientists of British Columbia; and Corporate Director Designation (ICD.D) from the Institute of Corporate Directors.

She serves as an independent corporate director for public, private and crown companies. In 2015, Maninder was chosen for Diversity 50 – Canada’s most diverse and eligible board candidates – by Canadian Board Diversity Council.

Maninder is passionate about giving her time, energy and expertise to organizations making a difference for women, and improving the lives of disadvantaged children. She is a highly sought after public speaker and has addressed audiences worldwide on the topics of technology, diversity, venture capital, and corporate governance.

Entrepreneurship is a state of mind. At its most basic, it’s high tolerance for risk. While most people fear failure, an entrepreneur balances it with a fear of missed opportunity. It is the ability to see opportunity, and pursue it without regard to access to resources at the time. Successful entrepreneurship is the ability to fail fast, fail cheap and fail forward. Start-ups are like a lottery, but better than lottery because you get influence the odds. Entrepreneurial process is learning by failure. It’s the ability build on what came before. First mover’s advantage is overrated. Pioneers get slaughtered, settlers prosper.

My mother used to say that being born a woman in India may not be the best start in life, but where you start should not limit how far you can go. Progress sometimes requires knocking down walls, other times, all you need to do is widen the doorway. Everything is an illusion. So pick one that is empowering. Your success can be measured by the number of uncomfortable conversations you’re willing to have. Build a few different skills – and then use them in different combinations as required, like pieces of Lego. Work like hell and advertise. Believe that you belong. It all starts with confidence.

I have learned that the road to success is always under construction; there are no traffic jams along the extra mile; one’s ability to succeed is always proportional to one’s willingness to fail; and very often a stubborn attitude towards the possibility of a positive outcome is the only thing standing between enduring and giving up. It took me only 15 years to become an overnight success. Opportunity doesn’t always arrive gift-wrapped. Sometimes, it comes in the form of a challenge or adversity. Never let a crisis go to waste. Goliath was the best thing that ever happened to David.

It is more about psychology than technology. We talk about hacking, operating systems, and automatic updates, and software patches. But at its most basic it is about human desire to connect, human greed to win free stuff, and a human tendency to click on a link because the email has our name in the subject line, or comes from a familiar email address (of a hacked friend). Humans are the weakest link in internet security. There a few simple steps of basic internet hygiene that we can use to safeguard ourselves against online viruses, just like we do with cold and flu.

When I started practicing as an engineer, there was episode that got repeated every time our team met a new client or a supplier. We would go around the room introducing ourselves one by one. And there would be Mark, John, Peter, Paul and then … Maninder. This is where the client would go “What? What was that again?” I mean … I don’t blame them … you are going on a round of apostles … and then there is someone who was different. Someone who looked different, sounded different … was different. As time went by, I realized that my being different was a great asset. People remembered me. It took them a while to get my name right …. but once they did … being a one person buffet of diversity was my calling card.