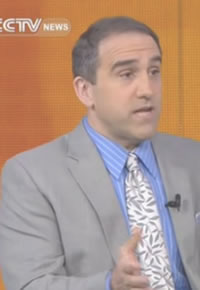 It’s common to hear that “Climate Change” is real, happening now, and that mankind is to blame for it, right? Wrong completely, says Marc Morano, executive editor of the incredible website climatedepot.com, host of the documentary film, “Climate Hustle”, and author of the book “The Politically Incorrect Guide to Climate Change”.

In his film, in his book and in his talk, Mr. Morano simply eviscerates the theory of “man made global warming”.  He shows that nowadays, every weather event seems to be blamed on man made CO2 emissions, and then he scrutinizes the record and the science – which is where the fun begins.  For one of the most lucid talks on this hot button topic, Mr. Morano is a must have at your next event.

Marc Morano, the award-winning host of Climate Hustle, is one of the highest profile voices of climate realism in the world today. He currently serves as executive editor and chief correspondent for CFACT’s award-winning ClimateDepot.com, a news and information service he founded in 2009. He is a frequent guest on radio and television talk in the U.S. and internationally, including CNN, Fox News, the BBC, and Canada’s Sun TV, and has been profiled in the New York Times, Esquire magazine, Rolling Stone, and numerous others.
From 1992 to 1996, Morano served as a reporter for the nationally syndicated “Rush Limbaugh, the Television Show.” He next served as an investigative reporter for Cybercast News Service and as a reporter and producer for the nationally syndicated television newsmagazine “American Investigator.” In 2000, his investigative television documentary “Amazon Rainforest: Clear-Cutting the Myths” created an international firestorm. During his tenure as senior advisor, speechwriter, and climate researcher for U.S. Senator James Inhofe (R-OK), he managed the award winning communication operations of the GOP side of the U.S. Senate Committee on Environment and Public Works.
Rolling Stone Magazine declared Morano one of the planets 17 “climate killers” in a cover story in December 2009. Rolling Stone called Morano “the Matt Drudge of climate denial” and “a central cell of the climate-denial machine.” Morano also received the Accuracy in Media journalism award in February 2010 for his key role in reporting on the global warming Climategate scandal. In June 2010, Morano given an award by Doctors for Disaster Preparedness(DDP) for “demonstrating courage and achievement in defense of scientific truth and freedom. In August 2010, Climate Depot and Morano were honored again by being inducted into Townhall Magazine’s “Townhall of Fame.” The magazine noted Climate Depot is “the No. 1 online destination for the truth behind today’s global warming hysteria.” In December 2010, The Daily Caller awarded Senator Inhofe and Climate Depot the ‘2010 Award for Political Incorrectness’. Daily Caller noted that “Morano, possessed a rapier-like wit and is the master of parody and satire.” In June 2011, Climate Depot received yet another award at the Heartland Institute’s 6th climate conference in DC.

The Politically Incorrect Guide To Climate Change – The Keynote Presentation

Less freedom. More regulation. Higher costs. Make no mistake: those are the surefire consequences of the modern global warming campaign waged by political and cultural elites, who have long ago abandoned fact-based science for dramatic fear mongering in order to push increased central planning. Marc’s keynote presentation, based on his book “The Politically Incorrect Guide to Climate Change”,  gives a new voice – backed by statistics, real-life stories, and incontrovertible evidence – to audiences that might be skeptical about the multi-billion dollar “climate change” complex.

“Morano has risen to be the most savvy media manipulator of the climate skeptic crowd” – Morano “pretty much chewed up Bill Nye the Science Guy on CNN with Piers Morgan a couple years ago.” –Randy Olson in Dot Earth column at New York Times – April 17, 2016
“Morano is one of a relative handful of self-described climate ‘skeptics’ who have wrestled thousands of the world’s leading scientists to a standstill of their own…. They are the ones who have convinced millions that there is no scientific consensus that climate change is real and human-caused.” – Environmental columnist Rick Holmes – July 21, 2015, Brookline Wicked Local

Morano is “one of the most powerful climate skeptics” – German Magazine Süddeutsche – December 20, 2015

Tina Brown’s Daily Beast recognized Morano as one of the “The Right’s Top 25 Journalists” who serves as a “bombastic foe of the Greens.” Daily Beast described Climate Depot as “a bustling, one-stop-shop for climate skeptics.”

Rolling Stone Magazine declared Morano one of the planets 17 “climate killers” in a cover story in December 2009. Rolling Stone called Morano “the Matt Drudge of climate denial” and “a central cell of the climate-denial machine.”

On Capitol Hill …
“For one-stop shopping of the best headlines of the day, I turn to my former committee staffer Marc Morano, who runs the site www.climatedepot.com.” – U.S. Senator James Inhofe (R-OK) In the blogosphere …
Climate Depot is the “No. 1 online destination for the truth behind today’s global warming hysteria.”
– Townhall magazine

“It’s a great place to keep up on the global warming debate. He’s probably single-handedly, in a civilian sense, the guy (other than me, of course) doing a better job of ringing the bells alarming people of what’s going on here.”
– Rush Limbaugh

Or among his critics …

“Debating Marc Morano, Why … oh, why? Why do it? NONE of Morano’s opponents have ever been any good.”
– Filmmaker Randy Olson (after two of Morano’s CNN debates)

‘Hockey Stick’ Prof. Michael Mann on Climate Depot: Mann says: ‘Morano has really accomplished a lot’
– ‘According to Mann, Morano has changed the entire rhetoric of the ‘deniers’

Climate Depot was also featured on the popular Drudge Report in December 2012 and frequently throughout 2013, most recently in an exclusive report on how global warming allegedly caused the conflict in Syria. Also see: Climate Depot’s Big Media Week: Over 300,000 visitors to Climate Depot in 24 hours – December 2012.

In April 2013, Rush Limbaugh featured Climate Depot on his nationally syndicated radio program. See: Rush Limbaugh touts Climate Depot: “Our man in Washington, from my TV show, Marc Morano has a website called Climate Depot. The left hates it. They literally despise it.” – Limbaugh also said, “What Marc does is simply collect every bit of data that is available all over the world via the World Wide Web.”

In December 2012, Climate Depot issued a detailed report about John Kerry’s views about climate and national security after he was nominated for Secretary of State. Morano was featured on Fox News denouncing Kerry’s climate beliefs. “Kerry is ignoring a large body of data and research that demolishes his beliefs,” Morano explained.

In November 2012, Climate Depot was featured in the German magazine Die Zeit. The publication declared Morano to be the climate skeptic “Godfather.” “Die Zeit portrays [Morano] as the communication and climate skepticism kingpin,” declared the German media.