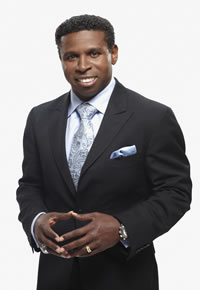 There aren’t many speakers in the world that make you laugh, cry, and leave you as inspired as Michael “Pinball” Clemons does. Whether you want to be motivated, inspired or learn about teamwork and leadership, then Pinball Clemons is a must hear!

Once known as one of Canadian football’s most exciting running backs, former Toronto Argonauts running back Michael “Pinball” Clemons is the CFL’s all time, all purpose yardage leader. However, it is his exceptional character, in addition to his outstanding athletic ability, which made him the remarkable fan favorite he was on the field, and continues to be off the field, to this day.

Michael’s commitment to community involvement, and his widespread participation in a number of different charities illuminate what separates him from today’s typical pro athlete – he cares deeply. His presentations are truly inspiring, empowering, and demonstrate why we all must give back.

At only 5 feet 6 inches and 170 pounds, he also inspires his audiences by illustrating what is possible and what it means to beat the odds… he is truly All Heart. (Which is also the name of one of his talks!).

In the rich 138-year history of the Toronto Argonauts, there are many football heroes who have brought pride to the city of Toronto and the Double Blue but it is difficult to find a more popular name in team history than Michael Clemons.

Born and raised in Florida, the William and Mary economics graduate began his career in the CFL in 1989 after a brief stint in the National Football League. As a player, Clemons compiled a brilliant CFL career with the Toronto Argonauts, including a pro-football record for most career combined yards with 25,396. On September 15, 2000, Pinball hung up his Double Blue jersey after 12 brilliant seasons to move directly into the position of Head Coach. He retired with 12 all-time team records to his credit, including career receptions (682).

The man they call “Pinball” officially took over the coaching reins of the Argonauts for the second time on December 17, 2002. After guiding the team to its first playoff appearance in 3 years, when he took over as head coach from Gary Etcheverry on an interim basis for the second half of the 2002 season, Clemons earned recognition as a finalist for CFL Coach of the Year honours, an honour he has repeated in 2003, 2004, 2005 and 2006. In 2004, Clemons led the team to its first Grey Cup victory since 1997, his first as Head Coach.

In 2007, the Argos finished in first place for the second time under Coach Clemons’ guidance. He is the second-winningest coach in Argo history with 68 wins, second only to Bob O’Billovich, and is one of just three coaches, O’Billovich and Leo Cahill, in team history to coach at least 100 games (124) in Double Blue. Toronto clinched its sixth consecutive playoff berth this season, which tied with Lew Hayman for the longest streak by a head coach in team history. Michael Clemons is also tied for third place, with Cahill, in Argo history for most playoff appearances by an Argonauts Head Coach with six. Clemons finishes his career with a lifetime regular season coaching record of 68-55-1 and a .552 winning percentage.

Known for a personality that is as electric as his style of play on the field was, Clemons redefines the meaning of community involvement and has been recognized by many organizations for his tireless work with charities, schools and other community groups. In 2007, he fulfilled a longtime ambition by launching the Michael ‘Pinball’ Clemons Foundation to quicken academic excellence, infuse depth of character, promote health and vitality, and inspire generosity in our youth. In February 2006, Clemons was named Chair of the Youth Challenge Fund by Ontario Premier Dalton McGuinty. In 2005, he was an integral part of launching The Argos Foundation – Stop The Violence and was later named to its Board.

Whether in uniform, on the sidelines, or in the front office, Pinball has always been and continues to be one of Canada’s favourite personalities. Clemons and his wife Diane, along with their treasured daughters, Rachel, Raven, and Rylie, are proud to call Oakville home.

Mike Clemons’ football career was characterized by incredible perseverence and great skill. At only 5’6″ and 170 pounds, he won against all odds. He succeeded while others predicted failure, gave more when less would have been satisfactory. All Heart is the story of a young man guided by fierce determination.

Michael is an athlete with true character, an incredibly generous spirit and a quiet dignity that shines on and off the field. Michael tells how his upbringing has shaped him, how his steadfast faith has always guided him, and how his commitment to his team and his community is much more than just a professional veneer, but a deeply held feeling of true spirit and belonging.

Mike will customize his inspirational and motivational talk for your group! Call for details.