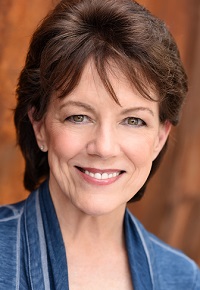 You may not know Susan Bennett, but you definitely know her voice!  Susan is a voice actor and singer whose voice has appeared on hundreds of radio and TV commercials, but you probably know her best as the original voice of Apple’s iconic virtual assistant, SIRI. In Susan’s fun presentation, you will learn how SIRI came to be, how Apple never actually hired Susan; you’ll hear about the profound effect SIRI had on her life, and the journey Susan and SIRI took together: Susan went from being a completely anonymous voice actor to being “Accidentally Famous”, giving TV appearances, and more. This is an unexpected keynote you don’t want to miss!

Susan has appeared on nationally televised programs The Mariah Carey Merriest Christmas Special, The Queen Latifah Show, CNN, Showbiz Tonight, The Jack & Triumph Show, the new To Tell the Truth, and she read the Top Ten list for David Letterman!

Susan was born in Burlington, Vermont, and spent her youth in New England.  She was always interested in music and acting, which she pursued during her four years at Brown University, singing in theater productions, and in the jazz band, “Conglomerate.”  Susan was the leader of singing group, The Chattertocks, as well.  After graduation, she married NHL hockey player, Curt Bennett, and moved to Atlanta, Georgia, where Curt played for The Atlanta Flames, and Susan began her voiceover and singing career.  Susan toured with Burt Bacharach as a backup singer, and later toured and traveled the world with Roy Orbison, also singing backup vocals, with a featured duet.  She sang jingles as well for such clients as Coca Cola, Georgia Power, Kroger, and Krystal restaurants.  It was after a jingle session that Susan was asked to voice a commercial when the voice talent didn’t show up.  She discovered that voiceover was something she did well and enjoyed, so she took voice coaching, got an agent, and started on a career that is still going strong!

Susan continues to live and work in Atlanta, Georgia, along with second husband guitarist and audio engineer, Rick Hinkle, of Audiocam Music.  Susan and Rick had a private event band called “Interactive!” for more than two decades, and they still continue to work together in their 60’s and 70’s rock and soul band, “Boomers Gone Wild!”

Susan has one child, son Cameron Schuyler Bennett, who lives in Los Angeles.  He is a photographer, and also works for social media company, Fanbase.

The Story Behind the Original Voice of Siri | Susan Bennett | TEDxFurmanU

“I have personally known and been working with Susan for over a decade. Her professionalism is obviously above debate as evidenced by the fact she has been a successful “go-to” voice talent and musician for years. I truly believe that the versatility of being both an accomplished singer as well as voice talent cross-compliments both disciplines. As a singer.. diction is important and often overlooked while voiceover work is aided tremendously by an innate sense of rhythm and melody. The bottom line is that regardless of whether she is singing or speaking into a microphone… Susan is an artist.” Wayne Dykes, Producer, Composer, Owner of AcousTech Music Productions ACOUSTECH MUSIC PRODUCTIONS
“Susan is one of the best in the business. Over the past 10+ years I have worked with Susan on countless radio and television voiceovers. She is extremely versatile, always professional, and an overall pleasure to work with. She’s also quite a talented singer as well. Susan’s range and experience make her one of the first female voices I would recommend for any project.” Jason Shablik, JASON SOUND