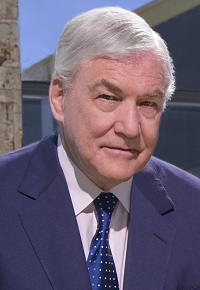 Author. Historian. Columnist. Investor. Intellectual Force. Founder of the National Post. Television Host. Member of the British House of Lords. There is only one man who could possibly fit all these descriptions, and it is one of Canada’s most distinguished figures: The iconic Lord Conrad Black.

Having just published his most recent books, “The Canadian Manifesto” in 2019, “Donald J. Trump: A president like no other” in 2018 and in 2016, “Backward Glances”, a collection of his articles and essays spanning his entire career, – on topics such as politics, culture, economics, and more – Lord Black is a must hear keynote speaker.

Whether the topic is judicial reform, geopolitics, or overcoming adversity in business and life, Lord Black is sure to inspire, educate and yes, entertain. He says exactly what he thinks, does not mince words, pulls no punches, and will defend his opinions with tenacity. A keynote or Fireside Chat with Lord Black could best be described as a talk about current events that blends in geopolitics mixed with historical perspectives, infused with a global point of view.

His latest endeavor in this regard is the “Scholars & Sense” show, a brand new bi-weekly podcast where he shares the mic with legendary conservative voices Victor Davis Hanson and Bill Bennett.

CONRAD BLACK is a financier and author and columnist in a large number of publications in Canada, the US, and the UK, including the National Post and National Review Online (New York). He is the author of biographies of Maurice Duplessis, Franklin D. Roosevelt, and Richard M. Nixon, a strategic history of the United States (Flight of the Eagle), and Rise to Greatness, the History of Canada from the Vikings to the Present. His most recent books are “The Canadian Manifesto” in 2019, “Donald J. Trump: A president like no other” in 2018, and before that, a collection of his columns and essays titled Backward Glances, just published by Random House-McCLelland & Stewart. He was the publisher of the London (UK) Telegraph newspapers and Spectator from 1987 to 2004, and controlled many other newspapers including the Chicago Sun-Times, the Jerusalem Post and the National Post, which he founded. He is honorary chairman of Conrad Black Capital Corporation and has been a member of the British House of Lords as Lord Black of Crossharbour since 2001, and is a Knight of the Holy See.

You can find Lord Black’s columns in the National Post, The National Review Online, American Greatness, The Epoch Times, The Hill, and is often syndicated. He continues to be a guest on a number of news outlets offering commentary, and has appeared on the BBC, CTV, FOX News, CBC and more. He is a regular guest on America First with Sebastian Gorka, and has just started a new podcast with Bill Bennett and Victor Davis Hanson, called “Scholars & Sense”, where they try to make sense of the news of the day.

The Criminalization of Addiction and Poverty

Drawing on his experiences in Florida as a three year “Guest of the US government”, Lord Black uses statistics and analysis to break down how drug laws are making this problem worse; and how the “war on drugs” has been a massive failure. He says the focus must move away from criminalization towards rehabilitation, and he says – all drugs must be legalized! Find out why in this hard hitting and eye opening presentation. Lord Black is a judicial reformer and helped his other federal “Guests” matriculate while working to clear his name. This is as moving a presentation as it is eye opening.

Will Canada become significant on the world stage, or will it remain a middling power?

In this talk, Conrad explores if Canada could become a meaningful world player over the next 4-8 years, and what the country will need to do to get there. He will also navigate the very interesting waters of what the Trump Presidency meant for Canada – in terms of trade agreements, and the overall economy- and now, what a Biden Presidency will mean for Canada.  This talk can be expanded geopolitically, and Lord Black discusses where he thinks the Western World will be heading in the future, in a post-covid world. We should or could call this talk ” Global Current Events…”.

Call us here to find out about other topics; Lord Black can customize his talk to suit your event or industry. UK clients, please don’t hesitate to contact us to find out when Lord Black might find himself back in London, or what we can do arrange a live presentation in the UK when possible.