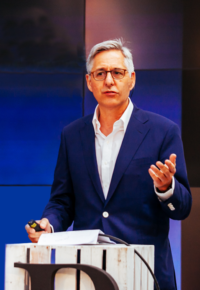 There is probably no better (or funnier!) journalist, author and chronicler of our chaotic digital age than Dan Lyons. Dan’s 2016 bestseller “Disrupted: My Misadventures In The Start-up Bubble,” was a tragicomic romp through his “old guy” experiences working for a hip tech startup.

His latest book is the perfect sequel. “Lab Rats: How Silicon Valley Made Work Miserable For The Rest of Us” is a witty and well researched examination of how Silicon Valley has  completely changed the way we work, in ways no one ever could have imagined.

Dan Lyons is THE expert on today’s new work culture, and how it’s changing businesses and lives. In Lab Rats, he does a deep dive into Silicon Valley’s new work practices, and what effect it’s having on employees and management alike. In this dynamic keynote, Dan calls out the new oligarchs of Silicon Valley who have broken the unwritten social work contracts we once took for granted. But there is hope! Dan also discovers companies that show a better way forward, by putting people first while still making a buck.

Dan Lyons is a journalist and author best known for his sharp critiques of Silicon Valley. He’s been called the Tom Wolfe of tech, and “the Jonathan Swift for our own digital age.” Not surprisingly, Dan has also written for HBO’s hit comedy, “Silicon Valley.”

Dan Lyons is an author, journalist, satirist, and screenwriter whose credits include two seasons working on HBO’s hit comedy, Silicon Valley. Recently, Dan partnered with Onda Entertainment in Los Angeles to produce a screenplay based on his book, Disrupted. That book tells the story of Dan’s hilariously catastrophic 18-month stint at a software startup run by millennials.

Dan spent 10 years at Forbes, then was tech editor of Newsweek, a columnist at Fortune, and an op-ed writer for the New York Times. As a satirist Dan became known in the late 2000s as the creator of a blog called The Secret Diary of Steve Jobs, where he wrote under the pen name, “Fake Steve Jobs.” At its peak this incredibly silly blog drew 1.5 million readers a month, and led to someone calling Dan “the Mark Twain of Silicon Valley,” and “a Jonathan Swift for our own digital age.”

Dan has spoken at dozens of conferences and events around the world. He has a B.A. from Bradford College and an M.F.A. from University of Michigan.

Techlash: How Tech Tools Destroy Productivity, and Why Even Some Tech Companies Have Started Banning Them
Here’s the dirty little secret that technology companies don’t want you to know: technology tools don’t make companies more efficient, but instead destroy productivity. Tech companies know this and that’s why some have been banning certain tools, like Slack and shared calendars, and restoring sanity to the workplace.

New York Times best-selling author Dan Lyons writes about the backlash against technology — aka, the “techlash” — as well as the new economy workplace in two books, Disrupted: My Misadventure in the Start-Up Bubble, and Lab Rats: How Silicon Valley Made Work Miserable for the Rest of Us. In the age of the Internet, Silicon Valley startups believed they could boost productivity by building tech-centric, “data-driven” workplaces, where algorithms were king. Instead the new compact has led to workaholism, burnout, stress and unhappiness among workers. Worst of all, it doesn’t work: these startups operate at light speed but never manage to become profitable. That has led to a “techlash,” a backlash against Silicon Valley companies and their business model. In Lab Rats, Lyons traveled corporate America and discovered a counter-revolution led by a new generation of startup CEOs. These pioneers are doing something really strange and counter-intuitive — they’re ripping technology out of their workplace, having come to believe that these tech tools don’t make workers more efficient and in fact have been destroying productivity. Instead, they’re focusing on people, and building human-centric workplaces. It’s working. They’ve boosted productivity and are delivering real profits, building sustainable companies with healthy, happy employees. When it comes to using technology in the workplace, people are starting to realize that less is more.

Across every industry, from retail to media to finance, incumbent market leaders face the threat of disruption and are racing to reinvent themselves. Many are looking to Silicon Valley for inspiration. In this talk, Dan shares the perspective of a tech industry veteran who spent two years working inside a fast-growing startup “unicorn” as a kind of “corporate anthropologist,” and explains the key things that make these organizations nimble, flexible and able to achieve rapid growth.

How do startups foster innovation? What is a “conversational culture”? How do startups use social media, externally and internally? How can an established company change its culture without wrecking the things that made it successful in the first place? Which perks really matter? What do Millennials really want? How do we manage a multi-generational workforce? Do we really have to get a foosball table? Really?

Dan’s talk draws on case studies as well as his own experience. He blends self-deprecating humor with insight about how the workplace is changing and how the right culture creates a healthy, agile, competitive, and sustainable organization.

From myths, fables, and fairy tales that are thousands of years old to classic Hollywood movies and timeless classic novels — there’s a reason why great stories endure and why they move us in such a powerful way. That’s also why great storytelling can be the key to building a brand and connecting with customers. Content marketing has become wildly popular in the corporate world, more than doubling in size in the past six years. In this talk, Dan Lyons — best-selling author, Hollywood screenwriter, and marketing guru — explains how to do it right.
How can you can harness the power of storytelling to boost your business? What are the elements of a great story? How do you spot one? And how do you tell it? In an entertaining, laugh-out-loud presentation loaded with real examples of great corporate storytelling, Dan answers these questions and more. He’s also available to run half-day or full-day storytelling workshops with your employees.

WHO NEEDS PEOPLE? HOW AI WILL TRANSFORM OUR WORLD

Imagine having an AI program that tells you which candidates to hire, or which employees to fire, or even an AI-based “iCEO” that can run a company better than Jack Welch, Bill Gates, and Jeff Bezos put together. Imagine an AI program that can sift through genomic data to save the life of a newborn baby who suffers from a disease so rare that doctors can’t diagnose the problem. Such programs already exist and are being used today.

In this talk, Dan Lyons — former Technology Editor at Newsweek, best-selling author, and modern workplace culture guru — draws on research from his latest book, “Lab Rats,” covers the good and bad aspects of AI, and explains how breakthroughs in AI and robotics will soon transform every aspect of our lives. How can organizations harness the power of these cutting-edge technologies? How many jobs will be lost, and which ones? How can employees avoid (or stay ahead of) the destruction? What will it be like to work alongside (and even take orders from) artificial intelligence?

Some anticipate a dystopian world where humans become unnecessary. Dan argues that in a world powered by artificial intelligence, humans might become more valuable than ever. One highlight of the talk is the story of Dr. Paul McDonagh, a researcher in Cambridge, Mass., whose AI software has been saving lives of newborn babies. (You might shed a few tears when you hear the story.) This is a talk loaded with concrete, real-life examples, a dose of humor, and an ultimately optimistic, hopeful message about the future.