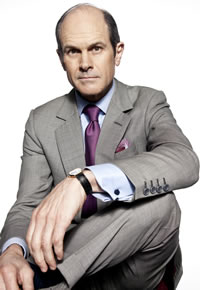 The best companies and leaders win by confronting reality faster than the competition. Geoff Colvin of Fortune delivers valuable insights to help them do just that. His unique perspective stems from unparalleled access to top global business leaders who tell him what they’re seeing, thinking, and doing. As a result, Geoff can provide audiences with a clearer path for an uncertain future. Geoff unpacks actionable insights on the economic, market, political, and technological forces driving disruptive change. Some of the topics and takeaways you’ll have from a Geoff Colvin keynote:

What are the political, technological, economic, and competitive forces shaping the future of business?

Learn what the best leaders & organizations doing right now to compete and grow in spite of deep uncertainty.

What is the future of work in a world filled with robots and smart technology? How will humans fit in?

How did the great performers become great? It’s more than natural talent or hard work. Learn the truth and apply their secrets.

Experience counts in serious times. For four decades at Fortune, Geoff Colvin has covered the economic, political, technological, and competitive forces disrupting business and how top leaders and companies adapt and transform to win in spite of them. The big takeaway, Geoff says, is that winning companies and leaders summon the courage to act –they stop protecting the past and start inventing the future –and they confront this reality faster than the competition. As business leaders face their biggest challenge ever, Geoff Colvin is the voice of experience who shines a light –revealing a clearer path for an uncertain future. His columns and cover stories for Fortune have earned him millions of loyal fans. Many of them also hear him dispense critical business insights on the CBS Radio Network, where he reaches seven million listeners each week. Geoff’s bestselling books include The Upside of the Downturn, Talent is Overrated, and Humans are Underrated. A keynote speaker with compelling content, Geoff Colvin is also a brilliant panel moderator and interviewer.

As Fortune‘s senior editor-at-large, Geoff Colvin is now in his fourth decade at Fortune. He is one of business journalism’s sharpest and most respected commentators on leadership, management, globalization, government regulation, corporate governance, competition, the economy, the infotech revolution, human performance, and related issues.

In addition to his daily CBS Radio Network segments (he’s done over 15,000 since 1995), Geoff has appeared on Today, Good Morning America, Squawk Box, CBS This Morning, ABC’s World News Tonight, CNN, PBS’s Nightly Business Report, and dozens of other programs. He also served as anchor of Wall $treet Week with Fortune on PBS.

Geoff is a respected author whose groundbreaking international bestseller, Talent Is Overrated: What Really Separates World-Class Performers from Everybody Else, has been published in a dozen languages. The Upside of the Downturn: Management Strategies for Difficult Times was named “Best Management Book of the Year” by Strategy + Business magazine. Geoff’s latest book is Humans are Underrated: What High Achievers Know That Brilliant Machines Never Will. It’s based on the idea in his wildly popular Fortune article “In the Future Will There Be Any Work Left for People to Do?” It looks at the trend of advancing technology performing ever more tasks better than people perform them, and the ways humans will create value for their organizations and their careers in the changing economy. The ideas he shares have profound implications for every business and industry.

A native of Vermillion, South Dakota, Geoff Colvin is an honors graduate of Harvard with a degree in economics and has an M.B.A. from New York University’s Stern School of Business.

The pandemic accelerated just about every trend you can think of. Nonstop change has now become the norm, and the world isn’t going back. While there is no “new normal,” the good news is we aren’t doomed to play defense. Geoff Colvin shows audiences how to embrace a world of continuous disruption while building powerful competitive advantages. This uplifting talk shows step-by-step how we can all respond faster to change and even get ahead of it as individuals, teams, and enterprises. Geoff provides actionable takeaways to help leaders face change smarter:

Global turmoil has roiled an already fragile economic order in ways that are still unfolding. At Fortune, Geoff tells the economic story in terms that focus on the risks and opportunities. Business people already know the numbers – what they might miss is the big picture; the forces driving the trends causing disruptive change in their world and, most importantly, what to do about it. In this presentation, the economy isn’t a bunch of statistics; it’s a story that Geoff tells engagingly, humorously, and memorably with valuable takeaways because, as he says, “Even in tough times, somebody’s going to win, why not you?” Geoff covers:

HOW TO CREATE A BUSINESS MODEL BUILT FOR THE FUTURE

Brace yourself: In 2022, 94% of CEOs said their company’s business model will have to change in the next three years! More important: The majority of them also feel they aren’t making progress fast enough. Business model innovation has become a must-have competence for all companies. That’s a problem for those that are unprepared but a huge opportunity for the rest. Geoff Colvin identifies the inescapable forces that are rendering reliable old business models obsolete and shows how companies of any size in any industry can – and must – rise to the challenge. Geoff reveals:

THE GOOD-NEWS FUTURE OF WORK

The nature of work changed drastically in the pandemic, but that’s only the beginning of what’s to come. New technology tools will profoundly alter what we used to call office work. Other technology will transform the 80% of work that isn’t done in offices (or at home). Beyond tech, changing social norms and reordered personal priorities will change who does what, where and how. While all this is quite disruptive, Geoff Colvin says the big picture is a bright one – billions of people worldwide being more productive, more content, and – believe it or not – less stressed. Geoff reveals:

Geoff Colvin’s unique gift is his ability to brilliantly moderate panels, lead onstage interviews, and host/emcee. He’s played these roles for more than three decades at Fortune conferences worldwide. Top companies and associations regularly utilize Geoff because he gets the most out of participants; he asks the right questions, listens intently to what’s being said on stage, and responds to that. He also connects ideas and insights across sessions, transforming a multi-part program into a satisfying, unified whole. He always keeps the discussion relevant and the energy high.

“In a word: fantastic! Geoff really was perfect for this. He kept the conversation lively. Geoff really knocked it out of the ballpark.”
– Microsoft

“No surprise, Geoff was articulate and insightful, thoughtful on global and fiscal issues affecting industry and candid on impressions of leadership. Not to mention, a wonderful man who I will forever be indebted to.”
– CEO, The Elliot Group

“Thanks so very much for your moderating today. I felt relaxed and right at home.”
– George H.W. Bush

“Once again your stewardship of the business sessions opened the door for a truly interactive and valuable dialogue for everyone. Your depth of understanding of the challenges these companies are facing and the opportunities that lie ahead added tremendously to our conversations.”
– John Chambers, CEO, Cisco

– Assistant to the CEO and President, Vanguard Health Systems

“Thank you very much for joining me this week at the THINK Finance: CFO CIO Leadership Exchange in New York and for contributing to our event in such a substantial manner.  It was such a pleasure to see you again and share the stage with you.  As with previous exchanges, you helped to draw out important insights from our speakers and deliver tremendous value to our audience. We at IBM value the perspectives you brought to our session and appreciate the time you spent with us. Thank you again for making our event a priority.”

“Geoff was wonderful and feedback was glowing from my team, leadership and personally.  I loved meeting him and he was a true professional and absolutely lovely!”

“Geoff turned in two outstanding performances for Commonfund. His grasp of business issues is second to none and his engaging style consistently pulls the best comments from our panelists. What more could one ask? But actually Geoff delivers more without our asking. He is one of the most genuinely respectful and caring people on the speaking circuit. And despite his vast business knowledge and superior interviewing skill, he hasn’t a trace of ego.”

“You are as good as any interviewer I’ve ever worked with.  You seem to bring out the best in everyone, and you sure do with me.  I hope our paths cross again before too long.”

“Geoff was AMAZING.  All the feedback that we have been receiving for the keynote and panel has been very positive.”

“He was amazing!  One of the best we’ve had . . . executives loved him as well as students, and he was so inspirational to our student group – they are a hard audience, and rallied around his message on Talent is Overrated.  So true!”

“Evaluation comments indicate that registrants especially liked your humor, the easy-to-understand message and the way you transitioned the information theory to real world applications.  You generated an overall evaluation score of 8.64.  This, coupled with the numerous positive comments, means your presentation, “How the Best Companies are Winning Today and Why Talent is Overrated”, was a great SUCCESS!