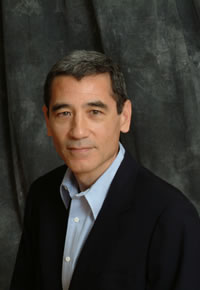 There are speakers who can talk about the Chinese economy…but then, there is Forbes Magazine contributor and columnist at The Daily Beast, Gordon Chang.

Gordon lived in China for 20 years and is the author of the book,  “The Coming Collapse of China”.  If you want to know what’s in store for China’s future( Politically, socially, and economically ), and how it might affect us in the West,  then Gordon Chang is a must hear.

His writings on China and North Korea have appeared in The New York Times, The Wall Street Journal, the Far Eastern Economic Review, the International Herald Tribune, Commentary, The Weekly Standard, National Review, and Barron’s.  Gordon once wrote in a Forbes column:

“Chinese leaders do not distrust us because they have insufficient contact with us.  They distrust us because they see themselves as the protector of a political system threatened by free societies and their vibrant economies. The mistrust is inherent in their one-party state.  It can never be relieved as long as the Communist Party remains in power.  As Ronald Reagan taught us, the nature of regimes matters.”

Gordon G. Chang is the author of Nuclear Showdown: North Korea Takes On the World, released by Random House in January 2006.  Showdown focuses on nuclear proliferation in general and the North Korean crisis in particular.  His first book is The Coming Collapse of China (Random House, August 2001). He is a contributor at Forbes.com and blogs at World Affairs Journal.

He lived and worked in China and Hong Kong for almost two decades, most recently in Shanghai, as Counsel to the American law firm Paul Weiss and earlier in Hong Kong as Partner in the international law firm Baker & McKenzie.

His writings on China and North Korea have appeared in The New York Times, The Wall Street Journal, the Far Eastern Economic Review, the International Herald Tribune, Commentary, The Weekly Standard, National Review, and Barron’s.

He has spoken at Columbia, Cornell, Harvard, Penn, Princeton, Yale, and other universities and at The Brookings Institution, The Heritage Foundation, the Cato Institute, RAND, the American Enterprise Institute, the Council on Foreign Relations, and other institutions.  He has given briefings at the National Intelligence Council, the Central Intelligence Agency, the State Department, and the Pentagon.  He has also spoken before industry and investor groups including Bloomberg, Sanford Bernstein, Royal Bank of Scotland, and Credit Lyonnais Securities Asia.  Chang has appeared before the House Committee on Foreign Affairs and the U.S.-China Economic and Security Review Commission.

He has appeared on CNN, Fox News Channel, Fox Business Network, CNBC, MSNBC, PBS, the BBC, and Bloomberg Television. He has appeared on The Daily Show with Jon Stewart and is a frequent co-host and guest on The John Batchelor Show.

Outside the United States he has spoken in Beijing, Shanghai, Taipei, Hong Kong, Seoul, Singapore, Tokyo, The Hague, London, Ottawa, Toronto, and Vancouver.

China on the Edge: What It Means for Us

The dominant narrative of our era is that this is “China’s century.”

China, however, has already passed certain inflection points.  The economy is stumbling, in fact growing only in the low single digits and on the edge of an historic debt crisis; the political system is in distress, with the military gaining influence; and the populace is volatile.  China is on the edge.

The motor of the country’s rise will also be the engine of its failure.  Even if official gross domestic product numbers are accurate—and they almost certainly overstate economic output by a wide margin—China is creating debt at least two times faster than it is growing.  So the country is in an impossible situation.

And why are China’s severe economic problems relevant to us?  Because for more than three decades the Communist Party has primarily based its legitimacy on the continual delivery of prosperity.  And without prosperity, the only remaining basis of legitimacy is nationalism.  China’s militant nationalism is creating friction in an arc of nations from India in the south to South Korea in the north.

Unfortunately, because of problems inside the Communist Party’s political system, China cannot compromise or maintain good relations with its neighbors, the international community, or us.  These days, Beijing is lashing out, a sign its leaders are now acting according to a logic the rest of the world is not familiar with.