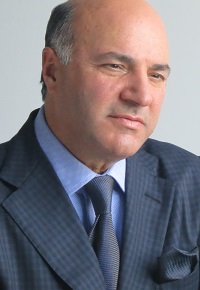 Kevin O’Leary, aka “Mr. Wonderful” on ABC’s hit show “Shark Tank”, is one of the most dynamic speakers in the world – especially when it comes to money and the markets.

Money and marriage; money and entrepreneurship, money and investing; talking to your kids about money; money and taxes; money and why capitalism works. And most importantly, what it takes to Make Money.

What many don’t see on Shark Tank is that Kevin is also an expert commentator on the global financial markets. His latest venture, “O’Shares Investments” reflects his investing DNA: Buy stocks that pay dividends…

Entertaining, fun, brutally honest and brilliant – Kevin’s keynote speeches are always a hit. Plus he’ll take the time to customize his keynote to suit your industry or organization. Call us to book Kevin for your next event – you will not be disappointed!

Kevin O’Leary is an entrepreneur and financier, best known for his role as an investor on ABC’s Shark Tank and CBC’s Dragons’ Den. He leads group of financial companies, and is chairman of O’Leary Funds. He is also the founder of O’Leary Fine Wines and the bestselling author of Cold Hard Truth on Men, Women and Money. Previously, O’Leary founded and was president of SoftKey (later called The Learning Company), a global educational software company, and negotiated its $4 billion acquisition by Mattel.

As the son of a travelling international business expert, Kevin O’Leary had the opportunity to live and be educated in Cambodia, Cyprus, Tunisia, Ethiopia, France and Switzerland. After completing his MBA, O’Leary founded Special Event Television, an independent production company that produced original sports programming such as “The Original Six,” “Don Cherry’s Grapevine” and “Bobby Orr and the Hockey Legends.”

O’Leary founded SoftKey Software Products (later called The Learning Company) in 1986. SoftKey was the first software company to apply the principles of consumer goods marketing to the software industry. SoftKey grew quickly as the price of personal computers declined and millions of American families began to buy software for education and entertainment. SoftKey soon became a catalyst of consolidation in the software
industry, raising over $1 billion in financing and completing a series of aggressive acquisitions, including WordStar International, Spinnaker Software, Compton’s New Media, The Learning Company, Creative Wonders, the Minnesota Educational Computer Company, Mindscape and Broderbund. By 1998, O’Leary’s company was the undisputed world leader in educational, reference and home productivity software and the world’s second largest consumer software company, with annual sales over $800 million, 2,000 employees and offices in 15 countries. In 1999, Mattel acquired the company for $4.2 billion.

In 2003, O’Leary co-founded Storage Now, a leading developer of climate controlled storage facilities. Through a series of development projects and acquisitions, Storage Now soon had operations in 11 cities, serving such companies as Merck and Pfizer, and was acquired by In Storage REIT in March 2007 for $110 million.

In 2007, O’Leary became a founding investor and Director of Boston-based Stream Global Services Inc., focused on the growing out sourcing business services market.

In addition to Shark Tank, O’Leary is the co-hosts the Lang and O’Leary Exchange, a daily business news television show, and a bestselling author of two books: Cold Hard Truth and Men, Women and Money.

O’Leary holds a B.A. in environmental studies and psychology from the University of Waterloo and an MBA from the Richard Ivey School of Business, where he serves as a board member.